Sleep for your Life!

I’m not exactly sure of the origins of the phrase “you can sleep when you’re dead” but I know it’s been with me all my life. The American writer, politician, scientist and founding father of the USA, Benjamin Franklin, wrote in his autobiography, “…there will be sleeping enough in the grave…”

Many of us live our daily lives exactly like this – seeing sleep as an unwanted inconvenience that gets in the way of us doing what we really want to and need to do in our lives. We often push the envelope at both ends. We wake earlier to squeeze more in before the working day starts (or often because that’s when the working day starts) and we stay up later because of family, friends, social lives and Netflix.

What have you done when you’re tired?

Many of us have anecdotes to tell of things we’ve done when fatigued. Some of them probably even seem funny…maybe you’ve put salt in your coffee instead of sugar; maybe you tried putting two contact lenses in the same eye; maybe you put the breakfast cereal back in the fridge and the milk in the pantry. They seem harmless enough and they probably are.

Sometimes we forget things we were supposed to do, or we struggle to recall a word. We can get a bit clumsy, or maybe irritable and snappy. None of these things is that terrible or life changing and we tend to recover and move on.

But there’s a shadow side to fatigue as well…

The serious consequences of fatigue

While some of the consequences of sleep deprivation mentioned above are not all that serious, many other are. A 2017 University of Adelaide study found 20% of respondents admitted driving while fatigued during the past year, and 5% of them also had had a car accident. About 20% of all motor vehicle accidents are attributable, partly or wholly, to fatigue and this figure rises to 30% for rural single vehicle accidents. After being awake for a period of 24 hours, driving performance is equivalent to a blood alcohol level of 0.1mg/dL alcohol – twice the legal driving limit in most of Australia.

Historically we’ve seen a lot worse too. On 26 April 1986, the nuclear power reactor located in Chernobyl, Ukraine, exploded during routine maintenance. The initial explosion and fire killed two workers. 134 cases of radiation poisoning were confirmed and over the next several weeks, 28 people died. At the time of the accident and explosion, the engineers had been on duty for 13 hours or more.

Just on three years later, on 24 March 1989, the oil super-tanker, Exxon Valdez, ran aground in Prince William Sound, Alaska. As a result, nearly 11 000 000 US gallons (41 000 000 litres) of crude oil were spilled into the water, resulting in widespread flora and fauna destruction. It’ s considered the second worst event of its kind in history. At the time of the ship running aground, the crew had put in a 22 hour shift loading oil, and the Third Mate at the helm had only had a catnap in the past 16 hours.

Clearly, sleep deprivation has consequences, which can range from mild and maybe even amusing through to deadly.

Why do we even need sleep anyway? (WARNING: Science ahead!!)

Believe it or not, the answer to that question is still not incredibly clear. There are several theories of sleep including those focused on energy conservation (a hangover from millennia ago when food sources were scarce and sleep was a good way of conserving what energy we had); body restorative theories and brain plasticity theories.

Our current research points to several vital functions that sleep performs. One of these functions, perhaps surprisingly, is weight control. Sleep appears to facilitate hormonal functions which are involved in appetite and activity. As a result, people who are chronically sleep deprived, tend to be at much greater risk of obesity. One study showed a 55% increase in risk of obesity for adults with short sleep duration. The effect in children was about half as great again.

Sleep deprivation or shortened sleep also negatively impacts cognition (our ability to think), concentration, productivity and performance. In other words, we generally don’t do very well on reduced sleep. If you can recall being tired and struggling to get through a list of tasks you’d normally blitz, or finding your mind wandering, or just not seeming to get the same results for the effort that you usually would, this is likely what was going on.

A fascinating study from 2014 showed that when we’re sleep deprived, we process emotional information from others far less effectively. We’re also far worse at recognizing emotional expression in others. So when you’re tired or over-tired and your significant other accuses you of not listening to, understanding or caring about them, they’re probably right!

Sleep seems to help us with a number of our daily functions – from maintaining good nutrition and levels of activity, performing well at work, problem solving, paying attention and effective social interaction.

So as long as nothing major hinges on it like driving a truck, or steering a ship or flying a plane, it doesn’t matter that much, right? Well actually…

The health consequences of reduced sleep

Chronic inflammation appears to play a central role in many of the most serious diseases of the 21st century – the so called “lifestyle diseases”. These include many cancers, heart disease, obesity, diabetes, asthma and Alzheimer’s disease.

Biomarkers for inflammation and consequent cellular damage are more prevalent in people who are sleep deprived. Some researchers are theorizing that interventions to improve sleep quality and quantity (rather than interventions focused on the disease itself) are likely to provide a benefit for those living with such disease.

The long-term consequences of chronically shortened sleep really can’t be underlined enough. If we want good health, good relationships and a fulfilling life, we can’t underestimate the central role that sleep plays in all of that.

At this point it’s important to distinguish between people who engage in BIIS (behaviourally induced insufficient sleep) – in other words simply choosing not to sleep as much as you need, and people who have a sleep disorder over which they might have little control without support and treatment.

The most common disorder is insomnia – the inability to sleep well, even when you really want to. Following that, sleep apnoea causes a great deal of difficulty for people who experience it. Sufferers tend to wake up tired, fall asleep easily and struggle to perform at their best. If you feel like you’re really committed to getting good sleep and no matter how much you try you either can’t sleep well or you feel tired and washed out all the time, please make an appointment with your GP so it can be properly assessed. The good news is that there are a number of avenues for improving sleep if this is you.

So how much do you actually need?

The science is fairly settled here. There are people who famously slept very little like Thomas Edison - the lightbulb inventor, who reportedly slept for about 30 minutes every few hours and German Chancellor Angela Merkel who apparently gets about four hours of shut eye each night. Such a lifestyle is often held up as admirable, with the subtle suggestion that to be successful we should all do it. The real truth of it is that we don’t know what the long-term health impact on these people is and what other prices they pay socially and emotionally.

According to extensive research by the US National Sleep Foundation, if you’re a healthy adult, you need between seven to nine hours per night. Every night. And preferably at about the same time. Many of us try to skate by on the skinny side of this! If you’re a shift-worker, or a young parent or perhaps providing care for an unwell relative or friend, it can be a real challenge to make sure you prioritize your own sleep, and by extension, wellbeing. It’s important to take the time to keep reflecting on what you can do to make small modifications to your lifestyle to ensure that you’re hitting the right amount of sleep on a regular basis.

What should you do if concerned?

If you’re concerned about either the quality or quantity of your sleep, take the time to gather some data first. Keep a sleep log for two to three weeks in which you record time of going to sleep (the time when you turn out the light and intend to sleep), the time you wake, and a rating out of 10 of your sense of the sleep quality you had. Beyond this if anything else was noteworthy, write it down. This could be that you dreamed a lot, were restless, woke several times, woke early, couldn’t go to sleep for a long time and so on. Make an appointment with your GP and take your sleep log with you if you’re concerned.

Here are some other ideas for making small improvements to your sleep – remember modifying sleep can take some time so you need to be patient. When you make a change to your routine, keep it going for at least a couple of weeks to assess its impact:

- Aim to be in bed around 8 or so hours as many times a week as possible;
- Keep your room dark, comfortable to be in and just slightly on the cool side;
- Remove stimulating electronic devices from your bedroom – phones, tablets, TVs;
-  Avoid caffeine in the afternoon / evening where possible;
- Avoid or limit alcohol consumption in the 3 hours prior to going to bed;
- Establish a bed time routine if you don’t have one – do the same things in the same order at        the same time (eating a meal, reading or watching TV, showering for example);
- Get out of bed as soon as you wake in the morning and get active straight away;
- Have a meal with good carbohydrates in the evening (foods like whole grains, pasta and                brown rice are good here);
- Exercise moderately vigorously as many days as you can – this induces a natural fatigue;
- Practice breathing and/or mindfulness meditation. Many people advocate 4-7-8 breathing.

So what‘s the takeaway? Sleep matters.

You can sleep when you’re dead, and like Benjamin Franklin wrote - there’ll be enough of that in the grave. But if you don’t take the time to sleep, that may be sooner than you think.

Writing exclusively for MindRazr, Simon is the CEO of Wellcoaches® Australia, an AHPRA Registered Psychologist, Board Certified Lifestyle Medicine Professional, Fellow of the Australasian Society of Lifestyle Medicine and Fitness Trainer. 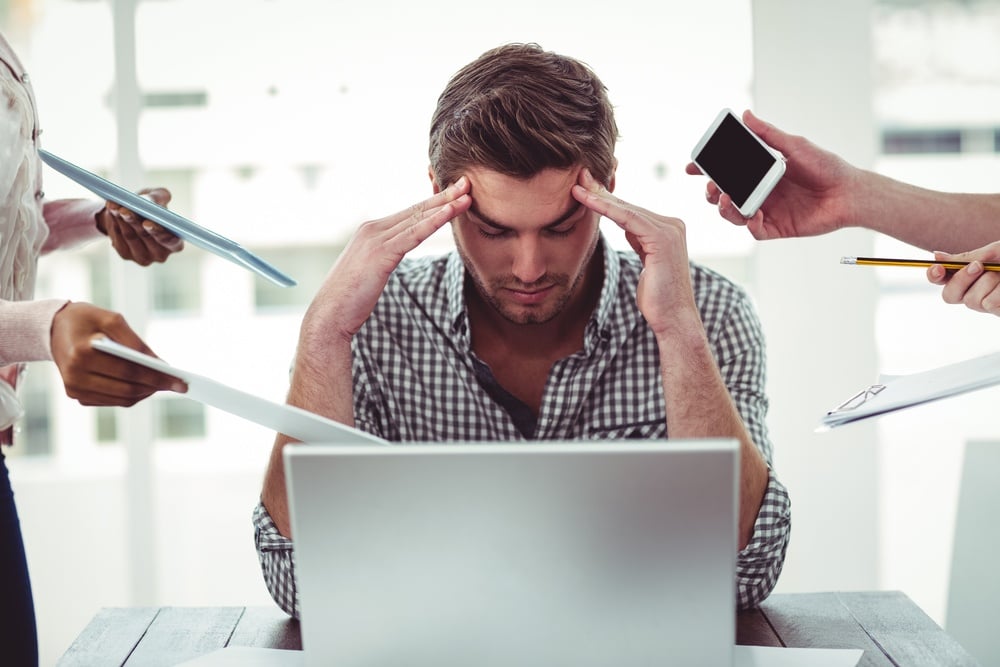 Poor Sleep Can Have a Huge Impact on Your Wellbeing